With a household full of pets and kids I am always looking for that perfect  couch cover to protect my couches from the mishaps that come along with these little creatures. From dog hair to juice spills and worse! A few months ago we moved into our new house and received new-hand me down couches from my in-laws. So my search began, off to find covers.  Couch covers can be pretty costly and so I turned to Groupon, but the covers I ordered were not as nice as they were made out to be, they started coming apart at the seams the moment I stretched them onto the couch.  From then my toddler decided that crawling through the seam and under the couch cover was a fun game and the rip just grew and grew.

I had been eyeing the Pet couch covers for a while now and my mother in law also mentioned them, so when I had the chance to work with Leader Accessories and Check out their Pet Couch Cover I was all over it.  Ordering it from Amazon made it a breeze and it arrived at my door in a matter of a few days. It came nicely packaged and I like that it’s made of a thicker quilted material that will absorb rather than let spills soak right through. 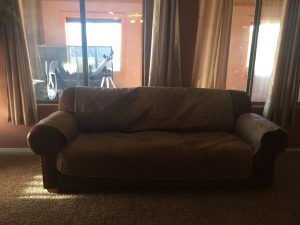 Much like you find on the car seat covers it has the tube like inserts that you can tuck into the sides and the back of the cushion to hold the cover in place, however the cover that goes over the back of the couch and the arms of the couch are not held into place with anything except for their own will.  Which means when my toddler climbs on and plays helicopters on the couch they fall out of place.  Luckily it is easy to put them back where they go.

I was a little concerned about the color because as you can see our couches are a dark brown and I ordered the tan, which is darker than I thought it would be so it actually worked out quite well. I really like the quality and thickness, the only negative is keeping them in place!

I got this product at a discount in exchange for a review, but all opinions are my own.

Travel Rent-free As A House Sitter Anywhere In The World. Save On Accommodation Costs As A Housesitter. Housecarers Has Been Securely Matching Homeowners With Housesitters Since October 2000. Pet Owners Save On Boarding Fees And Pet Stress With A Sitter. Click Here!

Know How To Feed Your Dog To Quickly Get Astonishing Results Click Here!